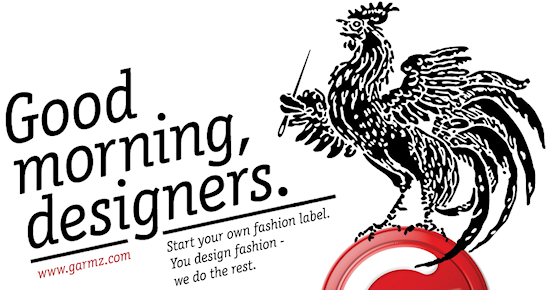 Hi, do you know this experience? You have a great idea, maybe one to make big money, and then in your enthusiasm you perform a Web search to find out that the Web is full of genius like you, who have already implemented the same idea ;-)

In the Internet business, it is important doing the right thing right at the right time. Garmz is definitely not the first startup based in Vienna, trying to build a "crowdsourced" fashion online shop, but besides useabrand, also from Vienna, they are still one of the first, worldwide!

The concept is simple to explain. You create the fashion design and Garmz does the heavy lifting for you, i.e. you submit your design (sketches), let the users vote and comment on it and the top voted designs get produced and marketed in the Garmz Web shop. If you are lucky, and your design wins the competition, you are rewarded about 10% of the total revenue of sold items, or about 7 EUR per item, if an item costs 75 EUR.

I see Garmz as another channel for young designers, who do not have an own label or shop yet. What will be risky however is, how to attract the customers on the other side of the equation to the online shop. One thing I like about Garmz is that it wants to give a lot of freedom to the designers and help them establish their own brand. Ideally, the finished piece will wear the label of the designer, not Garmz (not sure, if this will be the case).

Additionally, it could be frustrating for designers who target a special niche, if they never get enough votes to get their design produced. All of these issues can be addressed though and Garmz is also excellent in marketing, having won Maria Ratzinger from Stylekingdom, who writes Garmz Blog.

the finished piece will wear the label of the designer, not Garmz (not sure, if this will be the case).

It will be the label of the designer :)

his logo his product his everything

with a little "Made in Garmz.com" below :)

that's cool, love that :) looking forward to seeing the Web shop open and more of these beautiful sketches :)